We have always used the energy of the sun as far back as humans have existed on this planet. As far back as 5,000 years ago, people “worshipped” the sun. Ra, the sun-god, who was considered the first king of Egypt. In Mesopotamia, the sun-god Shamash was a major deity and was equated with justice. In Greece there were two sun deities, Apollo and Helios. The influence of the sun also appears in other religions – Zoroastrianism, Mithraism, Roman religion, Hinduism, Buddhism, the Druids of England, the Aztecs of Mexico, the Incas of Peru, and many Native American tribes.
We know today, that the sun is simply our nearest star. Without it, life would not exist on our planet. We use the sun’s energy every day in many different ways.
When we hang laundry outside to dry in the sun, we are using the sun’s heat to do work — drying our clothes.

Plants use the sun’s light to make food. Animals eat plants for food. And as we learned in Chapter 5, decaying plants hundreds of millions of years ago produced the coal, oil and natural gas that we use today. So, fossil fuels is actually sunlight stored millions and millions of years ago.
Indirectly, the sun or other stars are responsible for ALL our energy. Even nuclear energy comes from a star because the uranium atoms used in nuclear energy were created in the fury of a nova – a star exploding.
Let’s look at ways in which we can use the sun’s energy.

In the 1890s solar water heaters were being used all over the United States. They proved to be a big improvement over wood and coal-burning stoves. Artificial gas made from coal was available too to heat water, but it cost 10 times the price we pay for natural gas today. And electricity was even more expensive if you even had any in your town!
Many homes used solar water heaters. In 1897, 30 percent of the homes in Pasadena, just east of Los Angeles, were equipped with solar water heaters. As mechanical improvements were made, solar systems were used in Arizona, Florida and many other sunny parts of the United States. The picture shown here is a solar water heater installed on the front roof of a house in Pomona Valley, California, in 1911 (the panels are circled above the four windows).
By 1920, ten of thousands of solar water heaters had been sold. By then, however, large deposits of oil and natural gas were discovered in the western United States. As these low cost fuels became available, solar water systems began to be replaced with heaters burning fossil fuels.
Today, solar water heaters are making a comeback. There are more than half a million of them in California alone! They heat water for use inside homes and businesses. They also heat swimming pools like in the picture.
Panels on the roof of a building, like this one on the right, contain water pipes. When the sun hits the panels and the pipes, the sunlight warms them.
That warmed water can then be used in a swimming pool.

Solar energy can also be used to make electricity.
Some solar power plants, like the one in the picture to the right in California’s Mojave Desert, use a highly curved mirror called a parabolic trough to focus the sunlight on a pipe running down a central point above the curve of the mirror. The mirror focuses the sunlight to strike the pipe, and it gets so hot that it can boil water into steam. That steam can then be used to turn a turbine to make electricity.
In California’s Mojave desert, there are huge rows of solar mirrors arranged in what’s called “solar thermal power plants” that use this idea to make electricity for more than 350,000 homes. The problem with solar energy is that it works only when the sun is shining. So, on cloudy days and at night, the power plants can’t create energy. Some solar plants, are a “hybrid” technology. During the daytime they use the sun. At night and on cloudy days they burn natural gas to boil the water so they can continue to make electricity.
Another form of solar power plants to make electricity is called a Central Tower Power Plant, like the one to the right – the Solar Two Project.

Sunlight is reflected off 1,800 mirrors circling the tall tower. The mirrors are called heliostats and move and turn to face the sun all day long.

The light is reflected back to the top of the tower in the center of the circle where a fluid is turned very hot by the sun’s rays. That fluid can be used to boil water to make steam to turn a turbine and a generator.
This experimental power plant is called Solar II. It was re-built in California’s desert using newer technologies than when it was first built in the early 1980s. Solar II will use the sunlight to change heat into mechanical energy in the turbine.
The power plant will make enough electricity to power about 10,000 homes. Scientists say larger central tower power plants can make electricity for 100,000 to 200,000 homes.

We can also change the sunlight directly to electricity using solar cells. 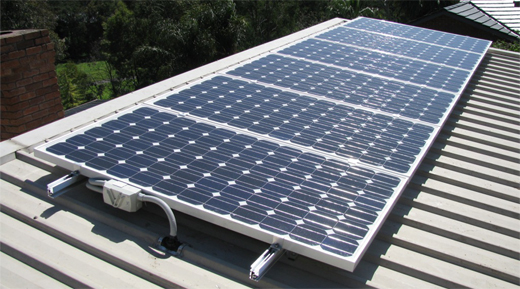 Solar cells are also called photovoltaic cells – or PV cells for short – and can be found on many small appliances, like calculators, and even on spacecraft. They were first developed in the 1950s for use on U.S. space satellites. They are made of silicon, a special type of melted sand.
When sunlight strikes the solar cell, electrons (red circles) are knocked loose. They move toward the treated front surface (dark blue color). An electron imbalance is created between the front and back. When the two surfaces are joined by a connector, like a wire, a current of electricity occurs between the negative and positive sides.
These individual solar cells are arranged together in a PV module and the modules are grouped together in an array. Some of the arrays are set on special tracking devices to follow sunlight all day long.
The electrical energy from solar cells can then be used directly. It can be used in a home for lights and appliances. It can be used in a business. Solar energy can be stored in batteries to light a roadside billboard at night. Or the energy can be stored in a battery for an emergency roadside cellular telephone when no telephone wires are around.
Some experimental cars also use PV cells. They convert sunlight directly into energy to power electric motors on the car.
But when most of us think of solar energy, we think of satellites in outer space. Here’s a picture of solar panels extending out from a satellite.

Figuring Out if Microhydro Will Work For You

We guarantee a long stable period of the spare-parts supplying.