Figuring out if microhydro will work for you

Figuring out if microhydro will work for you

My dad called me last night excited about the microhydro turbines he found in an off-grid living catalog or magazine (I forget which). He said he was going to buy one to put in the creek out back of his house, but I stopped him – thus saving him hundreds or thousands of dollars.
First, he thought he could use car batteries to store the energy. Nope. I told him he needed deep cycle batteries like the kind you use in boats and RVs.
Second, he thought he could run the wires right into the batteries. Nope. I told him all about inverters and the difference between AC and DC. I also explained that he could get away without one if this was to power only DC appliances, but that he’d still need a charge controller either way.
Third, and here’s the one I wanted to write about, you need a certain amount of water flow and elevation drop (head) in order to make micro-hydro work for you. His creek has hardly any head (it isn’t coming down a hill, but flowing through a valley) and it runs dry two months of the year. There may be enough flow during the other 10 months to get away with his lack of elevational drop, but that’s something you’d really want to know for sure before buying a microhydro system.
I think when it gets warm I’ll go out there with him and try to calculate the flow and head. Not being a microhydro expert (if you couldn’t already tell), I had to do a bit of research on how to figure out the flow and head / drop of a stream. 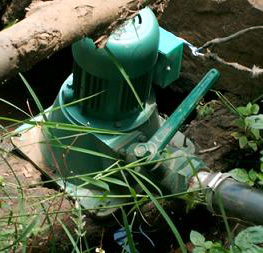 How To Measure Head – Elevation Drop

You’ll probably be sending your water through a pipe of some sort to direct it into the microhydro turbine. Head is the amount of elevational drop between the turbine and the start of the pipe. To measure head you’ll need the help of a friend. Get a long stick or a broom handle (something about 5 feet tall for this example). If you want to measure distance while you’re at it, bring the longest tape measurer you have.

Your friend stands where the turbine will be and holds the stick, bending down so that his eye is level with the top of the stick. You walk up until your feet are level with his eyes (as he sees it), at which time your friend should tell you to stop. He then walks to where you are, and you repeat the process until you reach the top where the water would begin to enter the pipe. Count how many times you have to walk up and multiply that number by five.
So if you walk all the way up the hill from where the turbine would be to where the pipe would start and your friend has to tell you to stop two times because your feet become level with the top of his stick, plus you walk about half-way again before reaching the top – your “head” would be about 22.5 feet (2.5 x 5), or about 3.81 meters (Google “12.5 feet to meters” Dang I love Google).

Once you have estimated the head you’ll need the average flow. I haven’t figured out an easy way to do this yet, but from what I’ve read a creek the size of my dad’s would flow about .5 cubic meters of water per second.

The max power potential of a micro-hydro system can be roughly estimated as: Head X Flow X 5 = kW 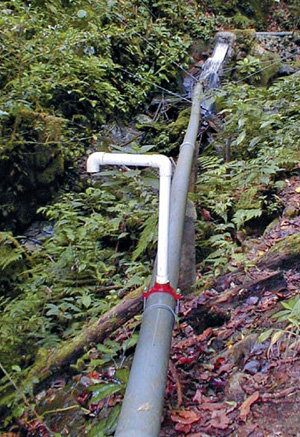 Hmmm, that’s cutting it close: 9.5KW They make micro-hydro systems scaled to as small as 5kw, but since he’s not going to be running at capacity every day of the year, and he’d have to pay for the turbine, piping, batteries, charge controller, inverter, wire… anything under 10kw isn’t likely to be cost effective.

Then again, this is all just speculation and me trying to work out in my head how to apply what I’ve read in books and online into a real world situation. I haven’t measured the flow of my dad’s creek or how much lift he has to work with, but assuming my interpretation of how all of this works is right, and assuming he has as little elevation drop/lift/head as I think – I doubt a microhydro system is right for him. But we shall see anyway!