Hydropower As Renewable Energy,Water constantly moves through a vast global cycle, in which it evaporates from lakes and oceans, forms clouds, precipitates as rain or snow, then flows back to the ocean. The energy of this water cycle, which is driven by the sun, is tapped most efficiently with hydropower. 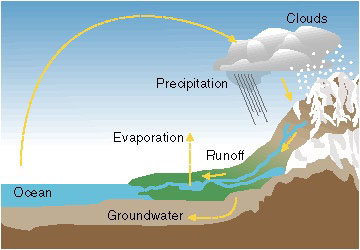 Hydropower plants capture the kinetic energy of falling water to generate electricity. A turbine and a generator convert the energy from the water to mechanical and then electrical energy.
The turbines and generators are installed either in or adjacent to dams, or use pipelines (penstocks) to carry the pressured water below the dam or diversion structure to the powerhouse. Hydropower projects are generally operated in a run-of-river, peaking, or storage mode.
Hydroelectric generation makes up about 96 percent of our renewable energy production, or about 310.3 billion kilowatt-hours of energy a year — saving over 531 million barrels of oil each year.

The power capacity of a hydropower plant is primarily the function of two variables:
Flow rate expressed in cubic feet per second (ft3/s)
The hydraulic head, which is the elevation difference the water falls in passing through the plant.
Project design may concentrate on either of these variables or both.
Examples of Hydropower Distributed Generation Projects
Commercial hydropower projects are generally operated in a run-of-river, peaking, or storage mode. Many projects combine the modes.

Diversion channels a portion of the river through a canal or penstock, but may require a partial dam. This provides a lesser impact to the stream flow.

Low impact hydropower method that utilizes the flow of water within the natural range of the river, requiring little or no impoundment. Run-of-river projects use the natural flow of the river and produce relatively little change in the stream channel and stream flow.
Run-of-river plants can be designed using large flow rates with low head or small flow rates with high head. The hydraulic head is the elevation difference the water falls in passing through the plant.

A peaking project impounds and releases water when the energy is needed.

A storage project extensively impounds and stores water during high-flow periods to augment the water available during low-flow periods, allowing the flow releases and power production to be more constant.
Pumped storage projects differ from conventional hydroelectric projects in that they normally pump water from a lower reservoir to an upper reservoir when demand for electricity is low.
Water is stored in an upper reservoir for release to generate power during periods of peak demand. For example, in the summer water is released during the day for generating power to satisfy the high demand for electricity for air conditioning. At night, when demand decreases, the water is pumped back to the upper reservoir for use the next day.

Smaller, single community projects are termed Micro hydro power and produce 100 kilowatts (kW ) or less.
Micro hydro plants can utilize low heads or high heads. The hydraulic head is the elevation difference the water falls in passing through the plant.
These are projects that can pass on RE towards small communities or single households.